A Random Walk to Nowhere argues that investors can beat the market and reap its rewards. 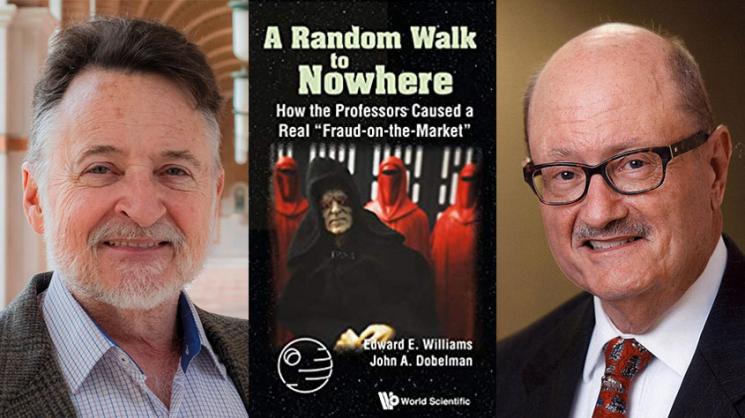 On the cover of John A. Dobelman’s new book, A Random Walk to Nowhere: How the Professors Caused a Real ‘Fraud-on-the-Market, is a picture of Emperor Palpatine, the arch-bad guy in the Star Wars films.

Dobelman’s co-author is the late Edward E. Williams, professor emeritus of entrepreneurship and of STAT, who had taught at Rice for 36 years at the time of his death in 2018. Williams is credited with founding Rice’s entrepreneurship program.

In their preface, Dobelman and Williams describe the efficient-market hypothesis as both “almost a religion that every financial economist had to buy into or risk professional crucifixion” and “an intellectual fraud.”

The essence of the hypothesis, which became popular among financial economists beginning in the 1960’s, is that financial market returns are difficult to predict. Share prices reflect all available information and stocks trade at their fair market value on exchanges.

The implication is that beating the market on a consistent basis is impossible and investors are most likely to benefit from investing in a low-cost, passive portfolio. No amount of sophisticated analysis can give investors an edge over other investors.

In contrast, Dobelman and Williams argue that investors can beat the market and reap its rewards, and stocks can deviate from their supposed fair market values.

“The hypothesis has even become a part of legal opinion, all the way up to the U.S. Supreme Court. It has been claimed to be the intellectual foundation of the index fund, which is the greatest institutional development in finance since the creation of the stock markets. Many Nobel Prizes in Economics have gone to those who did the original EMH research,” Dobelman said.

The hypothesis is attractive, Dobelman said, to free-market enthusiasts because it celebrates the virtues of a perfectly operating market. The audience for his book, he said, is the general public, not necessarily financial economists. Of course, he emphasizes the role of statistics in his critique but added, “There are no equations in the book. I’m proud of that.”

Dobelman is also proud to trace the transformation of economics into a “science”:

“Many an economist started down the path to being a Ph.D. mathematician or physicist only to find the work too intellectually challenging. By switching to economics, where the senior faculty and deans had no idea what you were doing, a sinecure could be established.”

A Random Walk to Nowhere is published by World Scientific of Singapore. Dobelman earned three degrees from Rice: a B.S. in electrical engineering in 1979, a master’s degree in business and public management in 1985, and a Ph.D. in STAT in 2004.

“The purpose of the book is to raise awareness,” Dobelman said. “People ought to know about the intellectual fraud that has been perpetrated. They should know why the efficient-market hypothesis is like George Lucas’ Death Star: on the whole, impenetrable and impossible to vanquish. We recall how that story ended.”