The potential of blockchain

New course will explore the emerging global applications for blockchain technology through the eyes of industry experts. 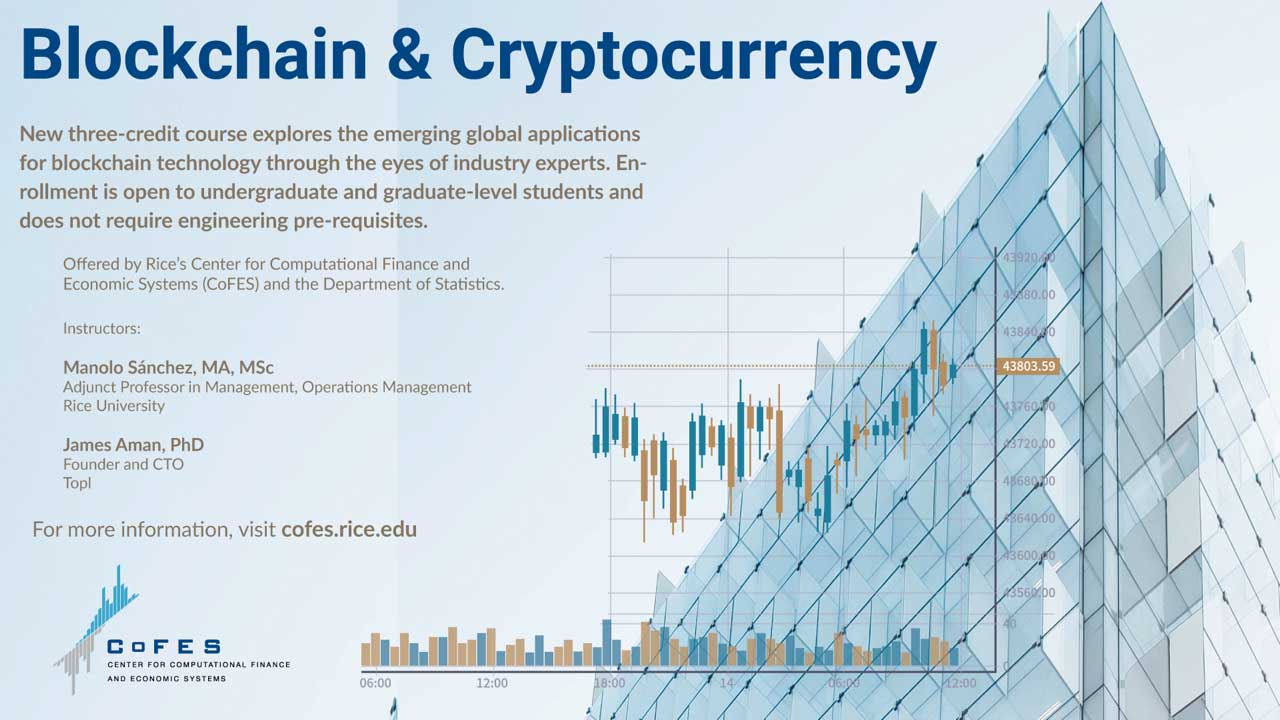 How will blockchains empower positive and radical change in our increasingly globalized and data-driven society?

A new course offered this fall at Rice University, STAT 487/687 – Blockchain and Cryptocurrency, will explore the emerging global applications for blockchain technology through the eyes of industry experts.

The three-credit hour course, offered by the Center for Computational Finance and Economic Systems (CoFES) and the Department of Statistics at Rice University, is sponsored in part by Rice alumnus Dexter Senft ('74), a long-term supporter of CoFES and member of the center’s External Advisory Committee.

The course enrollment is open to upper-level undergraduate and graduate-level students and does not require engineering pre-requisites. Students should be prepared to participate in highly interdisciplinary discussions on the use of blockchain technology and its potential to positively change existing economic and social structures.

"Blockchain, the foundation of modern cryptocurrencies, is changing many aspects of the financial services sector and the broader economy as its digital ledger-like system can offer greater traceability and verifiability of transactions, making it more secure,” said Manolo Sánchez, an adjunct professor in management, operations management at Rice, who specializes in teaching about disruptive technologies.

Sánchez is currently a director at Fannie Mae (FNM) and Stewart Information Systems (STC) after having served as chairman and CEO of BBVA Compass for 10 years.  At Rice’s Jones School of Business, he teaches disruption in financial services with a focus on cryptocurrencies and blockchain. Sánchez is an advisor to several financial technology and blockchain start-up companies, including Spring Labs, which specializes in credit and identity data; Securitize, a digital asset securities firm; and Topl, a Houston-based company focused on ethical and sustainable practices.

"In addition to its impact in the global financial sector, blockchain has begun to improve automation, especially in the health and impact sectors. This includes businesses seeking to improve quality of life through positive social and environmental impact as well as broader-based financial gains,” said James Aman, founder and chief technology officer of Topl.

Since its official founding in 2017, Topl empowers companies to drastically cut operational and certification costs. The company is serving clients globally who are involved in organic agriculture, renewable energy, conservation, ethical diamond mining, and microfinance.

CoFES has had a seeded interest in blockchain technologies since 2015 when the center began hosting seminars with Senft, who has over 40 years of experience in investment banking specializing in research, product development, and electronic trading in the fixed income businesses of Credit Suisse, Lehman Brothers, and Morgan Stanley.

In 2019, Sánchez and Aman began leading lectures in blockchain and cryptocurrency as a part of the course STAT 499/699 – Computational Finance.

"Mr. Senft’s gift boosts this momentum, and we are thrilled to broaden the course this fall,” Aman said, who has a doctorate in atomic/molecular physics and a bachelor’s in physics and in chemical physics from Rice University.

Students register for STAT 487/687 – Blockchain and Cryptocurrency via ESTHER.

Since its founding in 2002, CoFES has collaborated with departments at Rice University’s George R. Brown School of Engineering, School of Social Sciences, and the Jones School of Business to offer interdisciplinary training programs and courses. This has included open events, such as the Eubank Conference on Real World Markets, and many specialization courses and research opportunities in financial technology.